Last summer, some voracious caterpillars were eating all of our dill.

Eventually I gave up relocating them, and we brought a few inside to observe and study.  We learned that they were black swallowtail caterpillars, and watched to see if they would form a chrysalis.  I was very skeptical, until it happened:

One caterpillar attached itself to the curved side of the glass fishbowl, then formed its chrysalis.  A few days later, a second caterpillar attached itself to the first.  We wondered if its weight would pull down the first?  It didn’t.  And then, for a few days, we just had the chrysalises to look at.  We knew that an amazing transformation was (hopefully) taking place within, but we could not see it.

Every time I’ve been pregnant, I knew for sure that there was a unique, human baby inside of me, going through an amazing transformation.  I would think about the baby, wonder how he or she was doing, and eventually one day, I would feel his or her movements.  Already the maternal instincts have kicked in, and you simply love that baby, without condition.  Maybe you hope for health, maybe you even hope for a particular gender… but the love is ever-present and unconditional.

And then, life emerges out of hiding:

The butterfly waits for its wings to dry, then flies off, orphaned but without regret.  It knows everything it needs to know already about finding food and finding a mate.

If only the human baby had it so easy.  We were created to be born helpless.  His sucking reflex is there, but he has no way to get milk for himself.  Her darling feet may have been perfectly formed, but they are not yet capable of taking first steps.  Parents are asked to give of themselves, to sacrifice their time and resources and energy and sleep – to give and not count the cost – to lay down their lives for another.

But how do you know how to do it?

The first two months of my firstborn’s life, neither of us slept, and both of us cried and cried.  I had come home from the hospital with MAGAZINES about baby care.  MAGAZINES.  I read them and filled out those “nursing charts” – you know, okay, at 3:42 he nursed on the left side, then at 3:58 I moved him to the other side, then at 6:47 I nursed him on the right…  It was a joke.  My baby wasn’t happy, and I didn’t know when or how long to feed him.  I read that the only way he would ever learn to sleep is if he learned to take his feedings several hours apart, and all I wanted to do was sleep, but the baby seemed to want to nurse constantly.

I told my husband I was giving up, we were switching to formula.  He said, cautiously – and always so darn rationally – that perhaps I could give it just one more day, and give a call to a lactation consultant.  I remember being irritated.  What does he know about feeding babies?  He’s at work all day, and sleeps all night…  but I reluctantly consented, and the phone call the next day changed my life.  Not only did the consultant insist that I meet with her face-to-face, but she taught me to trust my baby to know when he was hungry, and to just nurse him whenever he wanted to nurse.  She asked me how I know when I’m hungry, and when I’m full – and asked me to trust that my baby knows these things, too.

I threw out the clocks.  I learned to understand and trust the communication given to me by my son.  I eventually discovered so-called Attachment parenting, and I also realized how ill-prepared I was for motherhood.  It was humbling and hard and wonderful.  The babies got plump and thrived, Deo gratias. 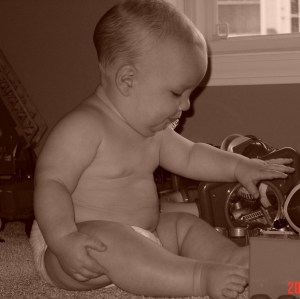 As my children grow, the attitude of trusting them to know their own needs has stuck with me.  Now at age 8, I can only recall 2 occasions that I have awakened my firstborn from sleep.  Every other day, he has simply awakened when he was done sleeping.

“When is the proper time for a child to start walking?  When she does.  When should her teeth start cutting?  When they do.  How many hours should a baby sleep?  As long as she needs to.”

Maria Montessori understood this idea of respecting and trusting children, and her writings have taught me how to apply them to the education of young children, especially the 2-6 year-olds.  I think that our children largely grow up fine, regardless of how we raise them – but that I am in the chrysalis of motherhood, and motherhood has brought amazing changes to me, in the way I view children – and therefore in the way I view all other people.   And learning to breastfeed-on-demand laid the foundations for my entire philosophy toward the education my children.

2 thoughts on “Foundations Of My Homeschool Style”

All parents of young children homeschool - some full time, others part-time. If children are awake, they are learning.

What can your children learn from you?

I hope this site will encourage a more intentional and more joyful parental involvement. I am a mother of 4 who has home-schooled extensively over the years using Montessori principles. I used to write at MyHomeschoolStyle.com but decided to move the posts here to this free Wordpress site. I know it isn't as clean here, and a lot of the links are now broken, but time permitting I will get them fixed. Thanks for your patience!